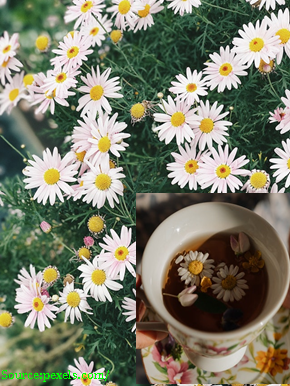 This tea is a caffeine-free alternative of green and black tea.

It is being used since ancient time as a medicinal herbs.

Essential oils of Chamomile are used in cosmetics industry as well as during aromatherapy.

Chamomile is an integral part of both traditional and modern medicine system.

It is being used since ancient time for several health issues such as hay fever, sleep disorders, inflammation, ulcers, muscle tremors, menstrual discomfort, wounds, GI-tract disorders, rheumatic pain, and hemorrhoids and many more.

Major phytoconstituents found in flowers of Chamomile is primarily phenolic such as apigenin, quercetin, patuletin, luteolin and their glucosides.

A standard extracts of Chamomile contain around 1.2% apigenin which is one of the most effective phytochemicals against cancer.

Roman chamomile is extensively used in cosmetic industry whereas Chamomile oil is used in aromatherapy.

This tea is one of the utmost popular single ingredient based herbal tea.

It is being used traditionally for various medicinal conditions.

Dried flower is used in the preparation of this herbal tea.

This herbal tea can be prepared using;

While preparing it, add the Chamomile flowers in hot water and let it infuse for 2 to 3 minutes. After that strain it and serve after adding either Jaggery/ Sugar/ honey in it.

Helping with sleep and relaxation

What are the benefits of chamomile tea?

This tea offers several health benefits such as metabolic syndromes (diabetes and cardiovascular syndromes), inflammatory diseases (such as inflammation and osteoarthritis), preventing and treating the cancer, reducing the menstrual discomfort, helping in the sleep and many more.

What are the side effects of chamomile tea?

This herbal tea is safe for majority of the people. Some of the side effect of it includes, allergic reaction, eye irritation, vomiting (if consumed in large quantity), sometime also indices hypersensitivity reactions.

When should I drink chamomile tea?

It can be drink any time of day, but best time to consume it is at least 30-45 min before going to bed.

Does chamomile tea detox your body?

Yes, Sesquiterpene lactone found in it is helpful in the process of the detoxification.

This tea help in losing the weight possibly by stimulating gastric juices which quicker digestion process.

Why does chamomile make you sleepy?

It is well-known as a mild tranquilizer or sleep inducer. Apigenin found in it, binds with some receptors in brain which ultimately decrease anxiety and initiate sleep

Is chamomile tea good for skin?

This tea possess anti-inflammatory and antioxidant properties which helps in relieving skin irritations during eczema. It also moisturizes and reduces the skin inflammation.

Chamomile tea is one of the best single herb based tea with multiple health benefits. So one should drink it occasionally to maintain health or frequently to manage various health conditions such as hay fever, sleep disorders, inflammation, ulcers, muscle tremors, menstrual discomfort, wounds, GI-tract disorders, rheumatic pain, and hemorrhoids and many more.

Disclaimer: This content including advice provides a general information only. It is in no way a substitute for trained medical practitioner opinion. Always consult a specialist or your doctor for more information. We do not claim any obligation for this information.

How to do Eye care naturally employing ayurvedic Knowledge

All about Abhyanga massage

How to do Eye care naturally employing ayurvedic Knowledge

All about Abhyanga massage